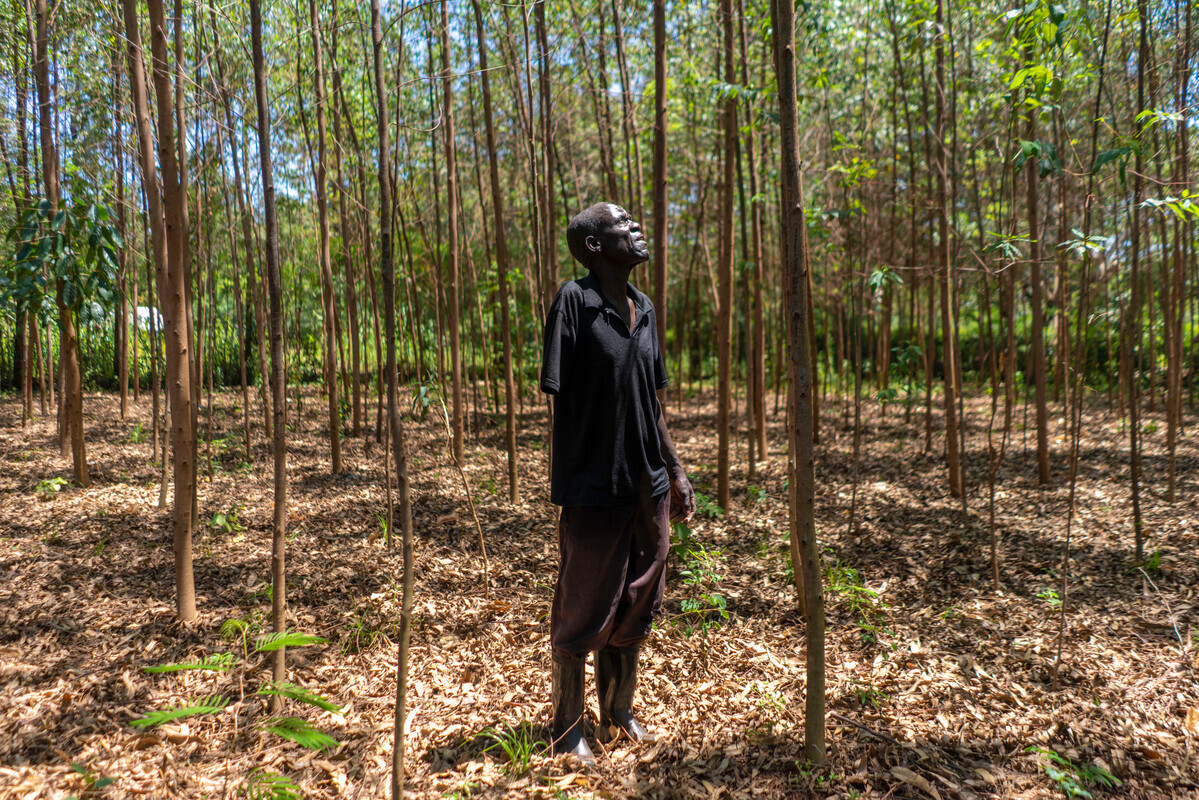 Climate discussions will dominate the news agenda in the run up to COP26 in Glasgow this October, and as a curtain-raiser to the global conference, the Scotland Development Alliance (SIDA) are hosting an innovative digital exhibition called Facing the Crisis. Send a Cow has been focusing on the theme of climate justice this year, highlighting the difficulties facing people in the countries we work in.

Challenging weather patterns have been influencing smallholder farmer’s decision making for decades, and often those who are most affected have the lowest carbon footprint. The three images below are showcased in SIDA’s online exhibition, and explore the impact of the changing climate on three of our farmers, Henry, Grace, and Mariam.

Henry has noticed rainfall steadily decline over the years. Food security issues are escalating, and he has had to change the crops he grows so he is less dependent on rainfall. The photograph of Henry gazing up at the sky through the trees was selected as a runner-up in the SIDA exhibition, and currently features on the site’s homepage.

Improved agricultural techniques have allowed Henry to use considerably less water, and now he can even grow vegetables during the dry season. Changing weather patterns is not Henry’s only concern, however, as he continues to support his two eldest grandchildren through university.

Living in the Busia county in western Kenya, 65-year-old Henry has used the training he received from Send a Cow to dig a fertility trench. Water is retained in the soil for longer, assisting the growth of vegetables for personal consumption. He has also built a drip kit and a keyhole garden. Drip kits are used to automate watering systems and help save 50% of the farm’s water, whereas keyhole gardens compact the most nutrient-rich soil inside a constrained wall, aiding a farmer’s ability to grow vegetables all year round.

Asked about the changes in weather patterns, Henry said that there is a difference in the rainfall when compared with years gone by:

““It used to rain for a few days in February and March, but now it can be dry from January to April””

Reduced rainfall changes everything for a smallholder farmer. Henry’s harvest has changed significantly, but his current crops serve him well:

““We now harvest beans and bananas which means we have food security, unlike the past when we only consumed maize. We now have ways of producing more food, which has enabled us to increase production.””

Mandala gardens are a practical design of growing beds that allow families to grow their own food all year round by strategically placing keyhole gardens next to each other. Smallholder farmer Mariam Nambukaya’s mandala garden is on a slope enabling her to capture precious run-off water and intensively harvest vegetables to sell to her community in the dry season. SIDA promoted Mariam and her mandala garden in the Adaptation section of the exhibition. In her first year with a mandala garden, Mariam planted carrots and made enough money selling her produce to buy a piglet.

Mariam lives and cares for her grandchildren in Lulyambazi, Uganda, and has been helped by Send a Cow’s Agriculture for Women with Disabilities Activity (AWDA) project. The project helps people understand their rights as people with disabilities, giving them confidence that they can accomplish what they set out to achieve.

A mandala garden uses compact soil to capture precious run-off water, aiding the growth of vegetables. They allow farmers to produce a high yield of crops consistently throughout the year.

Mariam was asked to describe Send a Cow in three words. She said:

““Uplifting – they took me from the bottom, giving me knowledge I didn’t have before. Empowering – we now have confidence and unity. It has connected us with many people across these districts. Equality – we are all treated equally.””

The climate crisis is making rains more unpredictable in western Kenya. When they do come deluges wash away the seedlings planted by farmers like Grace Akinyi Nyai, who is featured in the Impact section of the SIDA exhibition.

Lands may be waterlogged for weeks at a time. At other times, however, there may be severe droughts given weather unpredictability. This was the case last year in Grace’s hometown of Osogo, West Kamyamkago.

In a world of extremes, farming is becoming more difficult, but with help from Send a Cow Grace hopes to be able to adapt to the collapsing weather systems around her and continue to provide food and school fees for her children.

Grace planted her first seedlings of the year 2020 in February, but during harvest time in June, had no crops to harvest because the maize seeds she planted were swept away by the rain.

Grace has learned new skills that have better prepared her for the unpredictable rainfall, and when asked about what this means for her future, she said:

““I am looking forward to having a banana plantation which will help sustain my family and generate income. I can also grow some vegetables for consumption so I no longer have to do casual labouring on people’s farms.””

Who took Send a Cow’s photographs?

The photographs of Henry, and Grace were taken by Swedish photographer Fredrik Lerneryd, who is based in Nairobi. He divides his time between assignments for various media outlets, NGOs, and personal projects.

The photograph of Mariam was taken by Sylvia Mbatudde, who is based in Uganda.