Night moves: Toby Buckland camps out as part of Gardens for Good

Gardener and BBC Broadcaster Toby Buckland recounts his night camping out in his garden as part of Send a Cow's Gardens for Good campaign, which raises funds to help families grow enough food, earn a living, and go after their dreams.

I’ve just spent the night in the garden – not because I’ve lost the house keys, but as a show of support for Send a Cow’s ‘Gardens for Good’ Campaign. I wish I could say that pitching a tent on the lawn and sleeping under the stars was like taking a holiday at home, but it wasn’t. Not only do I lack comfortable camping equipment, but it turns out that my garden is noisier than downtown Marrakesh on market day. From the moment the sun went down, the hullabaloo of the birds was incessant, with seagulls cackling at their own jokes, followed at midnight by a blackbird trilling the last post from a spot right by my tent. After a few short hours, he packed up his bugle only for a barn owl to take up the chorus with its bloodcurdling screech. 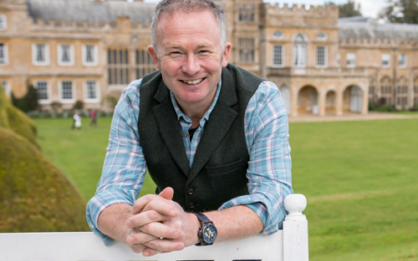 “Watering after sunset is a perfect time, as every drop finds its way down to the roots.”

By 3.30 am, as wide awake as a possum on Red Bull, I took the decision to quit the tent and find a useful job to do in the garden. Hunting molluscs is the classic nocturnal task, as that’s when field, keeled and garden slugs do their damage. But the recent warm weather has meant that these nocturnal pests have gone to ground.

I considered cultivating the veg beds like forward-thinking (and insomniac) continental farmers, who plough at night to reduce the risk of buried chickweed and hairy bittercress seeds seeing the sun and sprouting. If I’d been on a tractor and not in my pyjamas, I’d have done it. Instead, I did the best thing any nighttime gardener can do, and dragged out the hose. Watering after sunset is a perfect time, as every drop finds its way down to the roots. And just as in the day, it’s a pursuit that offers an opportunity to stop and breathe in the garden.

The miracle of moths...

Moths are an essential (if often overlooked) group of pollinators, and recent studies have shown just how valuable they are. We have a staggering 2,500 species in the UK, and although they are most noticeable fluttering by street lamps, they spend the lion’s share of their time gathering nectar and pollinating flowers. Moths double up on the work of daytime fliers, but also frequent flowers rarely visited by bees. They are an essential part of the food chain, especially for threatened bats, so encourage them to your garden by planting scented honeysuckle, heliotrope, rocket, buddleia and hebe.

In a moonlight-lit garden, there’s a surprising amount to enjoy, from moth pollinated flowers such as jasmine and nicotiana that glow and pulse with fragrance, to the ethereal look of the borders which, in the darkness, appear to have no fences and go on forever. The experience was so magical, I might do it again… after I’ve caught up on my sleep.

Find out how you can use your Garden for Good