Our impact on hunger

A step-change in nutrition and food security in east Africa

These three-year projects trained farmers in how to use their land productively and sustainably, so they can feed their families and look forward to healthy, positive and prosperous futures. Together this work demonstrates Send a Cow’s ability to have a significant impact on the food insecurity experienced by so many rural communities across the region.

Dawuro, in southern Ethiopia, is very remote and very beautiful. But life here is hard. In 2018 the Ethiopian government invited us to work with local communities in this zone to improve the nutrition and wellbeing of 90,0000 people.

Three years on, the families we worked with in Loma, Mareka and Gena Bossa districts are eating more and better food, and 99% of them are food secure – up from just 5% at the beginning of the project.

Our project, 75% funded by a UK Aid Direct grant and match-funded by Medicor Foundation, Rabobank and the Beatrice Laing Trust, was delivered by Send a Cow Ethiopia in partnership with the highly regarded Dawuro Development Association (DDA). Working more with established partner organisations such as the DDA is a growing feature of our approach (as discussed in more detail on our blog Breadth vs Depth).

The project took place in a context of severe poverty, malnutrition, extreme climate events, and traditional practices and cultural taboos around food and nutrition that harm people’s welfare. These included the avoidance of eating protein-rich foods including eggs, milk, chicken and mutton, the isolation of pregnant women from nutritional and other social support, and feeding infants food with little nutritional value.

To address this, we developed a network of 180 self-help groups that built knowledge and skills among everyone from household members to local government personnel in four key areas: agricultural production; improved nutrition; water and hygiene; gender relations.

Through a combination of well-tailored training, practical demonstrations and personal follow-up, we made sure the benefits of our farm systems training spread beyond the self-help groups, with strong evidence of neighbours and the wider community sharing knowledge imparted by our trained farmers. Three years on, here’s what we have achieved together…

90% of farmers are now putting their training into action to improve productivity, with 99% of households now food secure – a figure 29% higher than the project target.

The sale of surplus crops at market has quadrupled average annual household income from just £33.36 at the start of the project to £127.50 at the end. This was despite the impact of Covid-19, during which farmers were unable to sell surplus produce at markets and had to try to preserve or store it, or consume it themselves.

Environmentally-friendly practices such as mulching, composting and soil and water conservation have decreased soil erosion and increased the use of rainwater for crops – techniques that have reduced the need to buy fertiliser and enabled farmers to grow produce all year round.

The project also introduced fodder crops and high-production, drought resistant fruit seedlings that are able to produce crops during previously unproductive seasons. The percentage of farming families planting vegetable and fruit tree seeds increased from 20% to 94% at the project’s close: 14% above the target.

The project enabled farmers to see their smallholdings as businesses, and to balance the production of food crops for home consumption, fodder, and sale – practices that together enable farmers to achieve ‘food security’.

Farmers also learned how to keep records, calculate profit and loss, identify marketing opportunities, set prices, and use the power of cooperatives.

People eat a greater variety of food, and more of it

By the end of the project, almost 15% more families were eating a balanced diet (up from 2.9% to 17%) – evidence of real change in the mindset and attitude of farmers who have started to move away from traditional diets with very low nutritional value.

The sample group of women in our self-help groups increased their average body weight by almost 5kg over the project period, taking them into the “normal” weight category. Crucially, just 3% of children aged under five were underweight at project end (down from 20%). Breastfeeding mothers now feed infants for longer, bringing health benefits to mothers and babies.

There is no point improving a family’s diet if their health continues to be undermined by lack of access to clean water, and poor hygiene practices. Throughout the project, families learned simple ways to improve home hygiene and sanitation, and there was a high uptake of amenities such as latrines, tip-taps and drying racks. This has led to a reported fall in the incidence of water-borne diseases.

Our work in Dawuro reached 3,750 people with safe and reliable water sources, including 10 newly capped springs and 26 roof water-harvesting structures on schools and health posts. Water user committees were established and trained to maintain the springs, protect water sources from contamination and collect and manage maintenance contributions.

Traditional thinking has shifted: a fairer share of work

Women’s domestic workload decreased and their decision-making power increased thanks to our transformative household methodology that enables families to understand household workloads and power dynamics.

Many men now do domestic household chores such as cleaning and cooking, and women have gained more time to participate and engage in other productive tasks, including initiatives to earn extra family income.

The physical impact of pregnancy and the value of breastfeeding became better understood, with pregnant and breastfeeding women now eating their fair share of food. By the project’s close, 94% of group members reported improved family relationships and 98% of female self-help group members reported full involvement in decision-making about the farm.

Savings and loans groups have given small farmers financial independence, supporting them in developing their farm businesses and to pay medical and school fees. More than 75% of families now access village loans, with some groups establishing their own businesses by pooling their capital.

This newly established culture of saving, together with access to credit, created a social safety net for families to rely on during crises such as the ongoing Covid-19 pandemic.

Dawuro: the results in brief

Families are now eating three meals a day - up from two

98% of women are involved in household decision-making

Annual household income increased from £33 to £128

Asamannech, 35, from Dawuro, used to struggle to provide food for her two children. She attended Send a Cow training in sustainable farming techniques, learned to make compost and to plant nutrient-rich vegetables. She built a poultry shed, and used the savings from selling vegetables to buy five chickens.

“Last year I won an award from my self-help group, for being a model farmer and mother,” she says. “It was the happiest moment in my life.”

Gender inequality is a significant issue in Burundi. Most of the farmers in our projects are women, including many widows.

Our Gender and Nutrition-Centered Agriculture (GANCA) project in Burundi aimed to tackle chronic malnutrition and poverty among 2,000 families in Bisoro and Gisozi communes in the province of Mwaro.

A key approach was to prioritise women’s needs through a community network of Mamans Lumières. These volunteer ‘role model’ mothers taught women how to manage, develop, and increase the income from their farms, as well as providing child-rearing advice.

Family food security rose from 15% to 76%. Through farm-management training, families sustainably increased the productivity of their land, and with greater crop yields and training in nutrition had sufficient food all year round and healthier, diverse diets.

The project addressed the imbalances in women’s workloads. Decision-making power and control over resources were also tackled. Together, this resulted in a reduction in gender-based violence in the community (which has risen during the pandemic).

The number of families in group saving schemes almost doubled, from 45% to 88%. Supporting farmers to save and invest through village savings and loan associations enabled them to engage in joint enterprise ventures.

A follow-on project to extend our impact in Burundi

GANCA 2, partly funded by Bread for the World, is a further three-year project starting in July 2021, to extend and scale-up the work of both the GANCA project and a shorter youth-focused project that ran concurrently with it. 12,000 direct participants will be involved in GANCA 2, with the wider impact extending to a further 25,200 people.

We know that men are underemployed in these villages and lack hope, and men and women rarely work together or make joint decisions. GANCA 2 will be more community-oriented, and will work on gender equality with young couples. It will address the underlying causes of malnutrition and food insecurity, particularly for children, and pregnant or breastfeeding women. 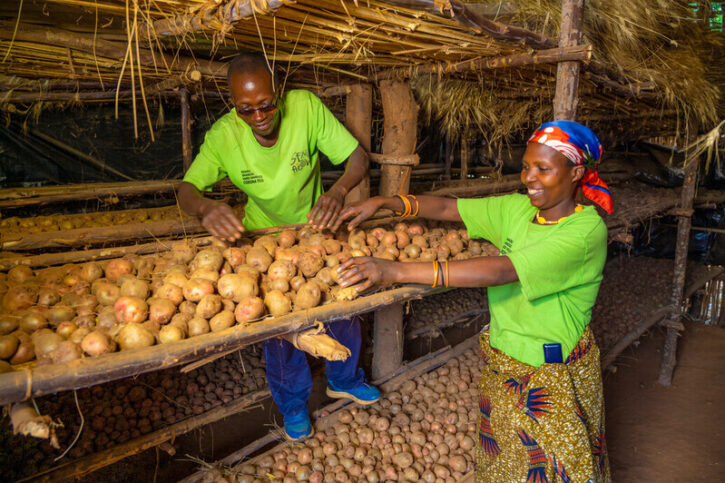 Farmers Jean Claude and Chantal select seed potatoes in their storage shed, in the Mwaro province of Burundi

Our work to improve food security and nutrition in western Kenya over the past three years has reached farming families across the region via the government’s community health volunteers, and our own peer farmer network.

In the face of the climate crisis and the pandemic, these networks increased farm income up to seven times, improved safe water and sanitation, and ensured nutritional needs were met, including those of children with disabilities and people living with HIV/AIDS. Women’s lives and workloads also improved, thanks to our long-term investment in shifting mindsets.

50% percent of communities are practising new farming techniques, including composting and soil conservation

95% of households are now treating their water – up from 61%. This is a result of awareness-raising and locating chlorine-dispensers next to water collection points

“Now I am an employer” - Miriam’s journey to success

Miriam Minayo, 62, lives with her husband and five grandchildren on her 0.2 ha (half-acre) farm in Migori, western Kenya. Before she became involved with Send a Cow, Miriam and her husband worked on other people’s farms to get food for their orphaned grandchildren.

“On many occasions my grandchildren would wake up, put on their uniforms and run to school without eating anything, with the hope that when they came back in the afternoon they would find something to eat,” she says.

Miriam and her husband did not believe they could grow crops because they lacked knowledge and skills. Their yields were low because of depleted soil fertility.

Send a Cow trained them in how to prepare the ground for cultivation and provided 10 banana plantlets of an improved variety. Today, Miriam grows maize, bananas, pawpaw, cassava, potatoes, beans and hot peppers, and sells them to a company that collects produce at the farm gate.

She regularly employs one person for three days a week on her farm, and during the planting and weeding season employs three to five others. “I am happy I no longer work on other people’s farms. Instead, I am an employer.”